It is now only a few weeks to the latest UK election. Markets hardly noticed the 2017 General Election, whereas the Referendum vote in 2016 caused significant moves in UK markets in particular. So what of the 2019 vote? Does this have the potential to shock markets or can investors sleep soundly, unfazed by potential outcomes?

Before we get onto thoughts around specifics, a general note on timing: with the Election only eight trading days before Christmas investors will have little, if any, time to implement changes to their portfolios in light of the result. Coupled with the fact that trading is always more expensive at this time of year, we strongly recommend allocations are already in place well before the election date.

As DB schemes in particular should be aware, gilt yields have fallen very heavily during 2019; long-dated yields fell below 1% for the first time ever during September. They have since increased rather rapidly during November in particular; is this a result of the drip-feeding of the spending plans of the two main parties and investors pre-empting the results?

Before we answer that, let’s look at what has been said. Both main parties are currently promising a significant increase in public spending, taking advantage of the very low cost of borrowing currently available. It appears that whilst both Labour and the Conservatives are proposing increasing public spending, Labour’s plans are for a far more significant increase. The specifics are, of course, yet to be fully analysed, but the general direction of travel is relatively clear; a loosening of fiscal policy to be largely funded by additional borrowing. 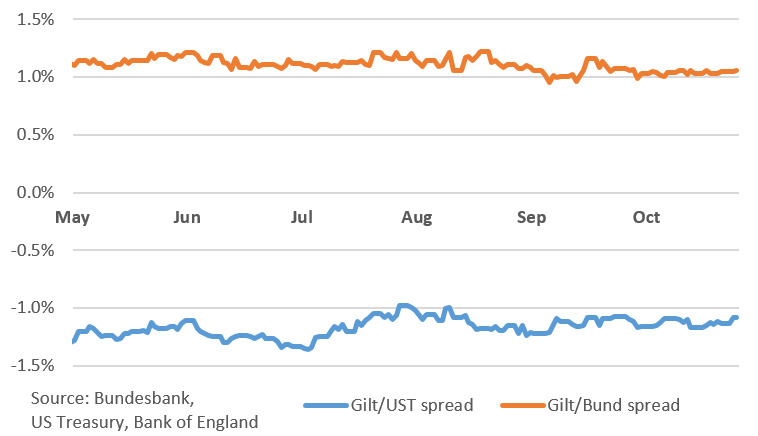 The chart shows that the gaps in yield between UK and German and UK and US borrowing costs have been very stable over the last six months. It is therefore clear that the majority of the recent increase in yields is a reaction to global events rather than views on the election. However, a significant increase in supply of gilts to the market could well lead to some rise in yields (fall in price). Provided the spending plans of the new government are perceived as “credible” then we would expect any such increase to be relatively modest.

Given the seemingly never-ending political uncertainty in the UK, we feel there is a risk that a “political risk premium” is attached to Gilts in the future, pushing up their yield (think of the difference in general between the cost of Italian and French debt relative to German), but this is an unlikely outcome at this stage.

What should investors know about Brexit's impact on Sterling?

Uncertainty remains around Brexit some three and a half years on from the 2016 Referendum – this this is not a surprise (see here for our original views on the potential impact of a “No Vote” from 2016). 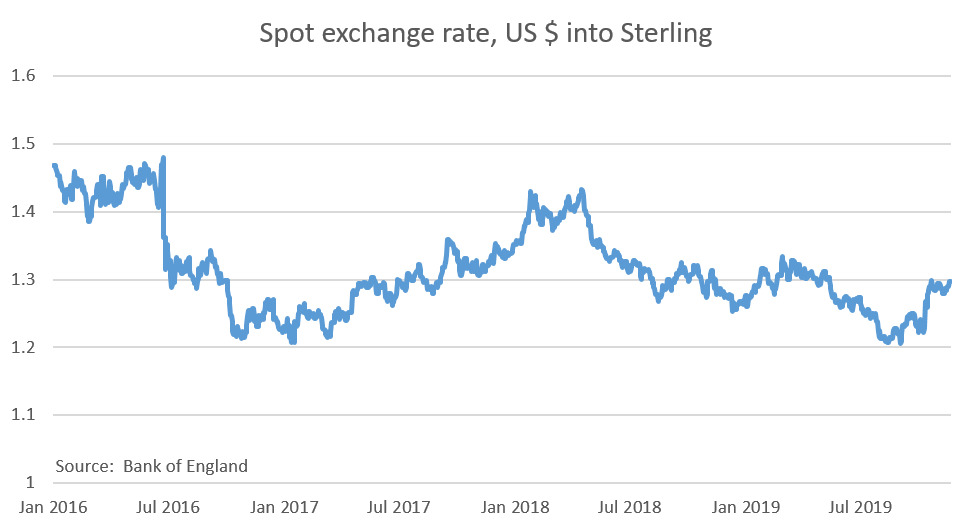 Will this election add much in the way of clarity around this issue? Potentially, if the latest polls are to be believed. At the time of writing the odds of a Conservative majority stand at more than 70% (implied from odds at major bookmakers) and this presumably increases the chances of the first stage of the Brexit process being agreed in Parliament. There is a chance therefore, of a rally in Sterling on this outcome as it at least leads to the next stage of negotiations with the EU. In comparison, a hung parliament, with no clear government, could have the opposite effect. After all, the latest EU extension only lasts for seven weeks after the Election, and this includes the Christmas period when significant progress is unlikely.

Ultimately, as we have been saying for some time, we believe it is sensible for clients to largely hedge currency risk given this heightened uncertainty.

How the Referendum may impact the UK Stock Market

What then of the impact of the Referendum on the UK Stock Market? The FTSE-AS was once felt to be a barometer of the health of the UK economy, but can no longer be consider as such, given some 80% of earnings now originate from overseas.

Therefore, if looking for guidance on the next direction for the FTSE-AS we suggest following the tweets from the President of the United States rather than TV debates of the Prime Ministers in waiting.

We do believe there is an additional risk worth bearing in mind around the announced plan from Labour to transfer (at nil cost) 10% of all UK companies to an employee trust. A Labour majority may result in a fall for the UK equity market, and the utility sector in particular, which has been targeted with nationalisation.

A more sensitive sector to the UK economy is probably within UK commercial property. Although the picture is complicated by the outlook for the retail sector, which has been dominating performance of the asset class over the past 12-18 months. As with the Brexit discussions, the election result could produce some price volatility around the asset class, but absent an extreme election outcome, we do not feel there will be a significant impact on tenant quality and therefore we expect overall yield levels to remain intact.

Labour’s manifesto also includes financial transaction taxes, implemented by widening the scope of stamp duty (which is currently levied on UK equities) to include corporate bonds, currency trades and derivatives. If enacted, these would likely increase transaction costs for all investors. At this stage, there are few details on exactly how this would work, or at what level these taxes might be set.

The key takeaway, don’t wait until the election to react to markets. Particularly in light of the time of year, make sure risk positions are where you wish them to be. We believe this is particularly important around liability hedging and currency exposures. Also, be ready to move swiftly after the election. Markets could be volatile, and there may be opportunities to take advantage.

Please note this material is for information purposes only and should not be construed as advice.

Get the latest independent commentary and exclusive insights from a range of experts at the forefront of risk, pensions, investment and insurance – tailored to your preference.