In its latest annual funding statement The Pensions Regulator noted it now expects trustees to consider what their ultimate objective is and set a strategy to meet that objective. This is in advance of the introduction of a new Funding Code of Practice, which will make this mandatory.

The choice for a scheme’s ultimate objective broadly falls into two camps – settling liabilities with another party (usually buying out with an insurer) or running the scheme on indefinitely (ideally in a low risk “self-sufficiency” style approach). Buyout can be an expensive option, and so naturally some trustees or employers might turn to self-sufficiency – but what are the challenges with a self-sufficiency approach? This blog gives my thoughts on this issue from a Scheme Actuary perspective.

What does self-sufficiency mean?

“Self-sufficiency” has been used by many in the pensions industry for some time to mean a scheme running on indefinitely with a low risk strategy, such that the trustees don’t believe they will need to call on the employer for deficit contributions in the future.

I personally don’t like the term “self-sufficiency”, as I think it is misleading. To me “self-sufficiency” implies that the trustees are, well, self-sufficient. However, that can never really be the case if you are planning on running the scheme on indefinitely. There is always some risk that a deficit could arise – albeit that risk may be small.

Also, even if deficit doesn’t arise the trustees are still reliant on the employer existing. If the employer were to go insolvent (even if this wasn’t caused by the scheme) then usually members’ benefits would need to be cut as the trustees would be forced to buy-out whatever benefits they could afford.

In summary, whilst running on indefinitely in a self-sufficient way may be sensible for many, it isn’t riskless. 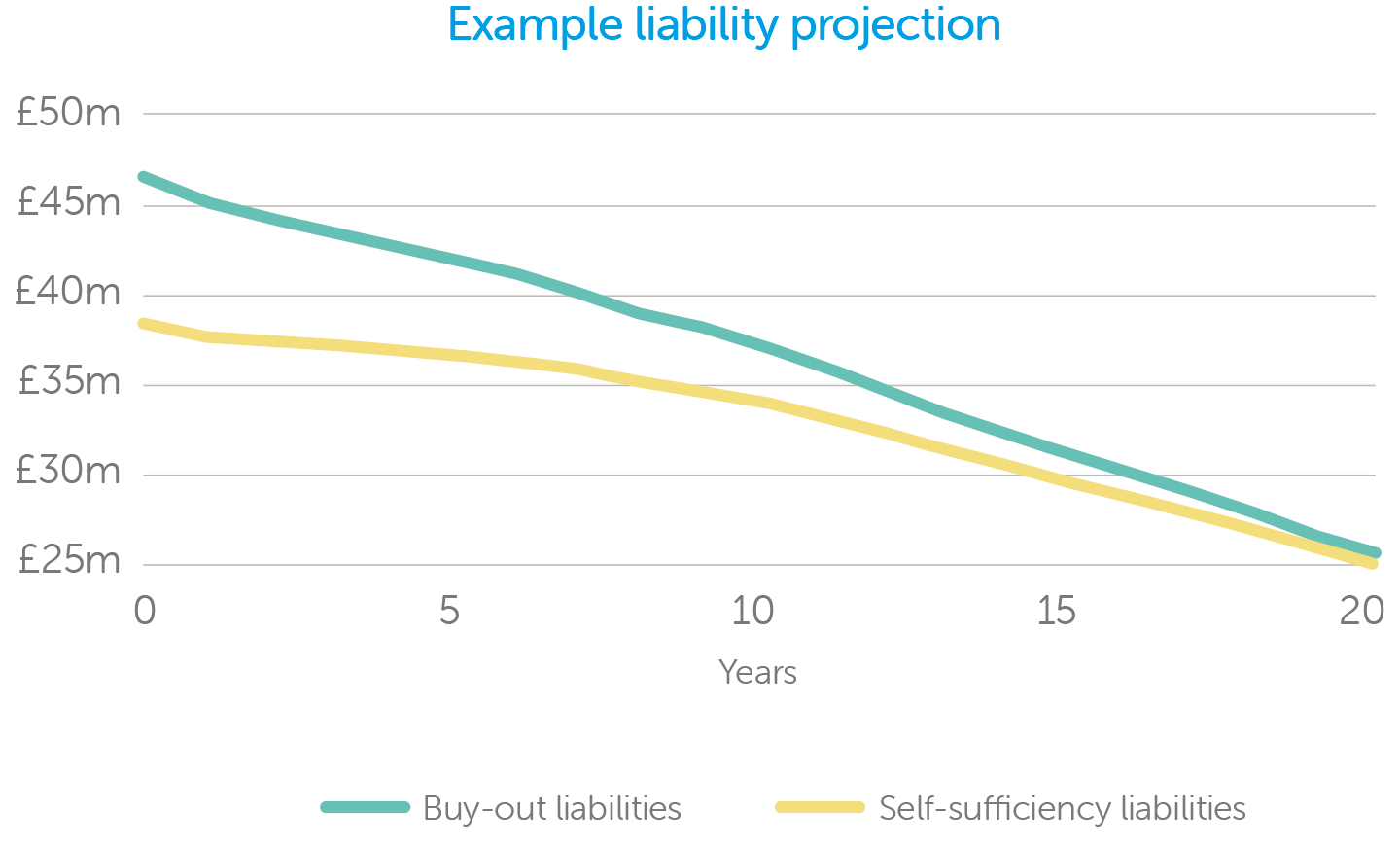 The most common reason trustees decide to target self-sufficiency is that it often appears cheaper than buy-out – and so is a more realistic target in the short to medium term.Whilst this is true now, the gap between self-sufficiency and buyout will reduce over time. This is mainly because insurance companies price non-pensioner members very prudently. Once most members are pensioners this gap could be small (or not exist at all).

I therefore think many schemes currently targeting self-sufficiency will ultimately try to buyout with an insurer in the future – it is just a matter of when. Indeed some trustees simply see self-sufficiency as the next step – and when they reach that point they will reassess whether buyout is achievable.

The other main reason for targeting self-sufficiency in the long term is if there is a strong desire from the sponsor to do so. This could be, for example, if the company is concerned about the accounting impact of a buyout, or simply because they don’t wish to pay an insurer’s profit margin. However, the trustees would of course need to be convinced that this was in members’ best interests.

There are also some that may have a covenant that is at least as strong as an insurer, and so they might well run on indefinitely – however, few schemes are in this fortunate position.

Can my covenant support a self-sufficiency strategy?

To set self-sufficiency as your long-term goal you usually would want confidence that your employer can cover the risks being run in the scheme and will still exist into the distant future. However, the pace of change in the world makes predicting which companies will still exist in 50+ years a difficult judgement for trustees.

Alternatively trustees could get comfortable setting a self-sufficiency target provided they are confident they will have access to sufficient funds to bridge the gap to buyout if it was ever needed. For some schemes regularly monitoring the employer covenant could provide adequate protection (as this would act as an early warning system of a downward spiral), and for others more formal covenant protection might be required (for example, some form of contingent security from the business).

The key point is trustees considering a self-sufficiency strategy need to consider carefully how they can be comfortable with their long term covenant requirements.

What are the risks with targeting self-sufficiency in the long run?

The sources of risk are similar to a buyout strategy – principally investment risk and the risk members live longer than expected. However, because the scheme is expected to run on for longer they are more material in a self-sufficiency strategy than a buyout strategy.

For example, one risk schemes face is that members live longer than expected due to a new medical advancement. If you expect to buyout in 15 years, then that medical advancement only concerns you if it happens in the next 15 years (as beyond that it is the insurer’s problem).  On the other hand, if you are running the scheme on indefinitely the risk is much greater as you are exposed to it for much longer.

Of course we can’t predict the future – all trustees and employers can do is try to understand how these key risks could potentially affect the scheme, and then use this information to help set an appropriately prudent self-sufficiency target.

How strong should a self-sufficiency target be?

There is no single definition of self-sufficiency and it is ultimately a matter of trustee judgement. However, I would typically expect a self-sufficiency target to be stronger for the following schemes:

They key point is one size doesn’t fit all.

We can't affort buyout,so self-sufficiency is the only option?

Many trustees/sponsors will feel daunted by the size of their buyout deficit, in particular given recent market trends have seen buyout deficits get bigger.  However, the gap between self-sufficiency and buyout will reduce over time as deferred members retire, and so the position may improve faster than you think.

My advice for trustees would be to keep your options open. Don’t dismiss buyout as a possibility, but equally be realistic that it may take longer than expected.

Finally, if you are embarking on a self-sufficiency journey, then make sure that you understand the risks you are running and try to ensure that the covenant you have, including security, is sufficient to cover that risk.

Follow the latest independent commentary and exclusive insights from a range of experts at the forefront of risk, pensions, investment and insurance – tailored to your preference.