We are now over a month into the Covid-19 lockdown. The UK government has made it clear that the lockdown decisions were based on scientific modelling of the coronavirus transmission and mortality projections, including work conducted by the Imperial College Covid-19 Response Team.

Here at Barnett Waddingham we are keen to revisit some of this early modelling to understand how daily figures released by the government compare.

In addition, we know it is important for insurers to understand the variance against their best estimate mortality and morbidity assumptions to assess their financial position, future claims as well as the possible short-term operational impacts to staffing levels or key-person risk over the coming months.

In this blog we will discuss the trends in mortality, possible future morbidity rates and consider how actual rates are comparing to the initial modelling used by the UK government.

According to 27 April 2020 figures*, there have been 161,145 confirmed cases and 21,768 Covid-19 related deaths in the UK, as reported by Public Health England (PHE). If you were to consider these numbers in isolation, this implies a case fatality rate of over 13.5%. However, we know we don’t have the full picture and such a simple approach is far from appropriate. The number of deaths and infections do not reflect the true scale of the issue.

Due to the lack of testing in the UK, it is difficult to understand the true number of infections and, as highlighted in a recent Barnett Waddingham blog by Jon Palin, the excess mortality seen in the Office of National Statistics (ONS) data suggests that the “hospital deaths” reported by PHE are only part of the impact.

"The number of deaths and infections do not reflect the true scale of the issue . . . the excess mortality seen in the Office of National Statistics (ONS) data suggests that the “hospital deaths” reported by PHE are only part of the impact."

On 21 April 2020, ONS published provisional death figures, which suggest that deaths in England and Wales during the week to 10 April are 41% higher than PHE figures, due to the inclusion of deaths outside of hospitals.

How do we best review the progression of Covid-19?

The infection fatality rate is derived from the number of deaths and the number of infections, whether diagnosed or not. Clearly, this is likely to be inaccurate at this stage, as we do not have a firm view of the number of people infected, but not diagnosed. This would require blanket testing across the nation.

The alternative measure is the case fatality rate, which looks at the number of deaths related to the number of people testing positive for the virus. This can vary by country and even regions within countries, but is at least a starting point for comparisons. However, this is by no means perfect. As indicated above, official figures published in the UK have significant limitations and do not give accurate case fatality rates.

The implied case fatality rate is also entirely dependent on the protocol of testing. For example, in Germany, where more of the population are being tested on a daily basis, the case fatality rate is just over 3%. Countries who are only testing people who show severe symptoms will likely see a case fatality rate much higher. Data released by Singapore and the United States, where there has also been significant testing carried out, shows the variability of this measure, where recent case fatality rates were 0.2% and 5.4% respectively.

Can we use the information available to estimate the number of people infected?

A simple approach to relate the confirmed deaths back to a morbidity assumption is to back-solve using base assumptions of fatality rates. For example, in the paper published on 16 March 2020 by Imperial College London titled “Impact of non-pharmaceutical interventions (NPIs) to reduce Covid-19 mortality and healthcare demand”, the infection fatality rate was assumed to be 0.9%.

Putting this another way, the paper assumes that out of every 1000 people infected by Covid-19, nine will die as a direct result. Working back from this assumption (assuming it is reasonable) and looking at the total deaths reported in UK hospitals to date, suggests there may be over 1.75m people that are or have been infected in the UK; approximately 2.5% of the population.

If we apply these assumptions to the excess deaths caused by Covid-19 based on all-cause mortality data, where Jon estimated that 25,000 Covid-19 deaths may already have been seen, then this number of estimated infections gets even bigger - about 2.8 million. However, as evidenced from global rates above, the true infection mortality rate could realistically sit anywhere between 0.05% and 5%. So this approach only helps to illustrate the uncertainty of the situation.

It is still too early to see the full impacts of the mitigations the government has put in place. However, we believe that the trends in mortality rates over the next month will give a clearer idea of the pandemic’s progression and the success, or otherwise, of our fight to minimise the impact.

The Imperial College paper estimated the number of daily deaths under a range of risk mitigating measures. Due to the length of the incubation period (up to two weeks) and the estimated time before some people falling sick require intensive care, it takes a minimum of two to three weeks to see how successful the mitigations in place are. We are now in the period where these mitigating factors will start to impact the trend in the number of hospital based deaths.

The graph below illustrates how the Imperial College projections expected the number of deaths to diverge significantly, based on the impact of transmission mitigating policies under different scenarios. This is compared to the actual hospital deaths seen in eleven days up to 22 April. 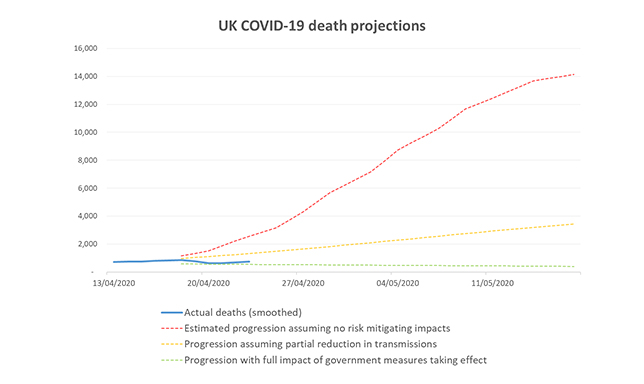 Early indications are that the risk mitigating measures are working. The shape is broadly in line with the Imperial College London progression with the full impact of government measures taking effect, albeit at a slightly higher level.

We are continually monitoring the figures provided by the UK government and the ONS with the aim to estimate the number of symptomatic infections. This enables us to project expected morbidity rates and develop an appropriate range of how many infections may arise and when.

To date, we are using this work to help our clients form a range of scenarios for mortality and sickness projections to help them understand the potential short, medium and longer-term consequences on their balance sheet and operational resilience.

If there is one thing we know for sure, it is that these models do not predict the future. Nevertheless, we believe they give a sensible range of possible outcomes which, at such a time of uncertainty, is in itself a useful start.

If you would like to talk about this topic or have any questions in general, please get in touch with your usual Barnett Waddingham contact to find out how we can support you. Alternatively, please contact the authors below.

*These figures are being updated daily at time of writing.

Follow the latest independent commentary and exclusive insights from a range of experts at the forefront of insurance, risk, pensions and investment – tailored to your preference.