Longevity risk, the risk that people live longer than expected, is one of the key risks that pension schemes are exposed to. It has become ever-more high profile in recent years, partly due to rapid rises in life expectancy and partly due to the current low interest rate environment.

While longevity may not pose as great a risk to pension schemes in the short term as, say, large falls in equity values, it can be an expensive risk to take over the long term. Longevity risk is unrewarded (i.e. the scheme is not expected to benefit from holding the risk) which means it is important for sponsors to consider whether this risk should be hedged.

Several insurers are now offering longevity swaps for pension schemes which allow longevity risk to be hedged; a handful of such deals have now transacted. These types of contracts can either be written as a derivative or with an insurance "wrapper". The option of combining hedges for interest rate and inflation risks with longevity swaps also exists.

There are two types of these longevity swaps - named lives swaps and population index swaps.

A named lives swap protects against the possibility of the scheme members living longer than expected throughout the lifetime of the scheme. In practice, most swap providers only offer these for retired members where the total liability of the protected members is at least several hundred million pounds. At the commencement of the swap, the trustees agree to pay a set of fixed cashflows to the swap provider (the dark blue bars in the graph below). These cashflows will last for a pre-agreed term and will cover the provider's expected cost of future payments to the scheme pensioners. They will also include an allowance for the provider's expenses and expected profit margin.

In return for these fixed cashflows, the swap provider pays cashflows to the scheme based on the actual longevity experience of the pensioners.  In practice, a net payment is made one way or the other each period - for example, monthly, quarterly or annually.  If members live longer than assumed (grey bars below), the provider would make a net payment to the scheme.  However, if members die more quickly than assumed (light blue bars below), the net payment would be paid by the scheme to the provider. 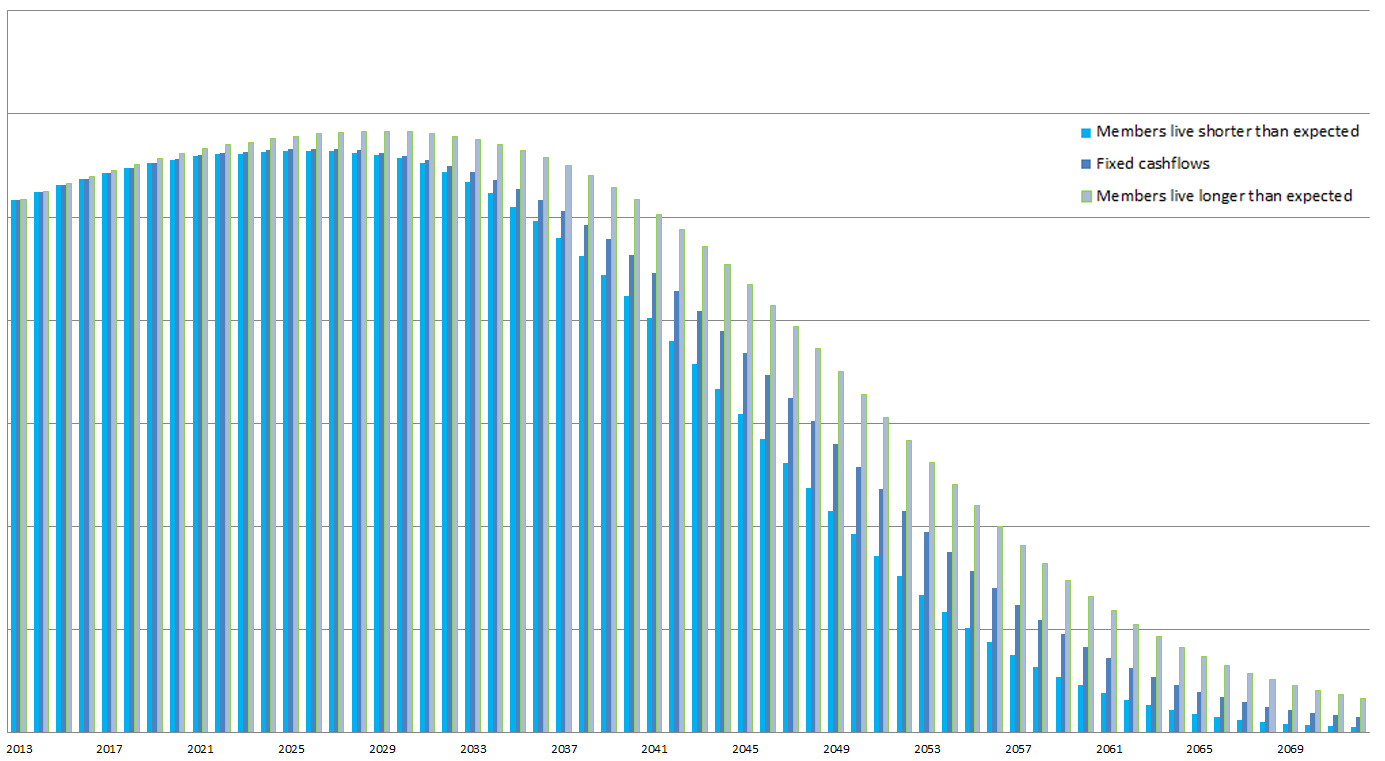 Named lives swaps require a considerable amount of monitoring to ensure that deaths are recorded accurately and that the net payments are correct. The documentation for such a swap is also considerable and this is one of the reasons why only large pension schemes tend to complete these transactions.

Under an index-based longevity swap changes in life expectancy for the national population are used rather than the actual scheme experience. The pension scheme receives (or pays) a payment at the maturity of the swap calculated with reference to the national population statistics (for example, for England and Wales) compared to a pre-agreed baseline assumption.

Such contracts are designed to be used for non-pensioners (where the majority of a scheme's exposure to longevity risk lies) and would be expected to have a term of around 10 years. At the moment we understand that the minimum deal size would be in respect of liabilities of at least £50 million but this may change in the future. Index swaps are more appropriate for smaller schemes as data requirements are less onerous and adviser fees should be lower.

The main objective of index-based longevity swaps for non-pensioners is not to hedge against deaths before retirement - as these are relatively uncommon. Index swaps aim to protect the scheme against improvements in the actuarial longevity assumptions over the swap's term, as these are typically set according to the general population's experience.

For more information about the independent, expert services we provide in this area, speak to our team today.

Also in this section

Insights that go beyond the headlines

Providing you with independent commentary and exclusive insights from a range of experts at the forefront of risk, pensions, investment and insurance.