The costs of providing defined benefit (DB) pension schemes have risen considerably in recent years; partly due to low interest rates and increasing longevity and partly due to increased compliance costs, burdensome legislative requirements and the loss of tax relief for pension schemes on dividends.

Some employers are finding that the costs and risks associated with traditional final salary schemes make them no longer viable.

Legislation protects benefits that have already been accrued and as such changes (without member consent) cannot typically be made retrospectively. However there are a number of steps that can be taken to reduce the costs and risks associated with future accrual. This section of the FD Guide discusses these options.

Closure of a final salary scheme to future accrual is a significant step but one that many employers have made in recent times. This will ensure that there is no further build up of pension liabilities and is usually the first step in containing, managing and sometimes ultimately buying out past service liabilities.

The following charts, taken from the PPF's 2015 Purple book, shows the distribution of eligible defined benefit pension schemes by status since 2006 and the distribution of scheme statuses by number of members, in 2015. In general, you can see that the proportion of schemes that have closed has risen dramatically in recent years and that smaller schemes are more likely to be closed to future accrual. 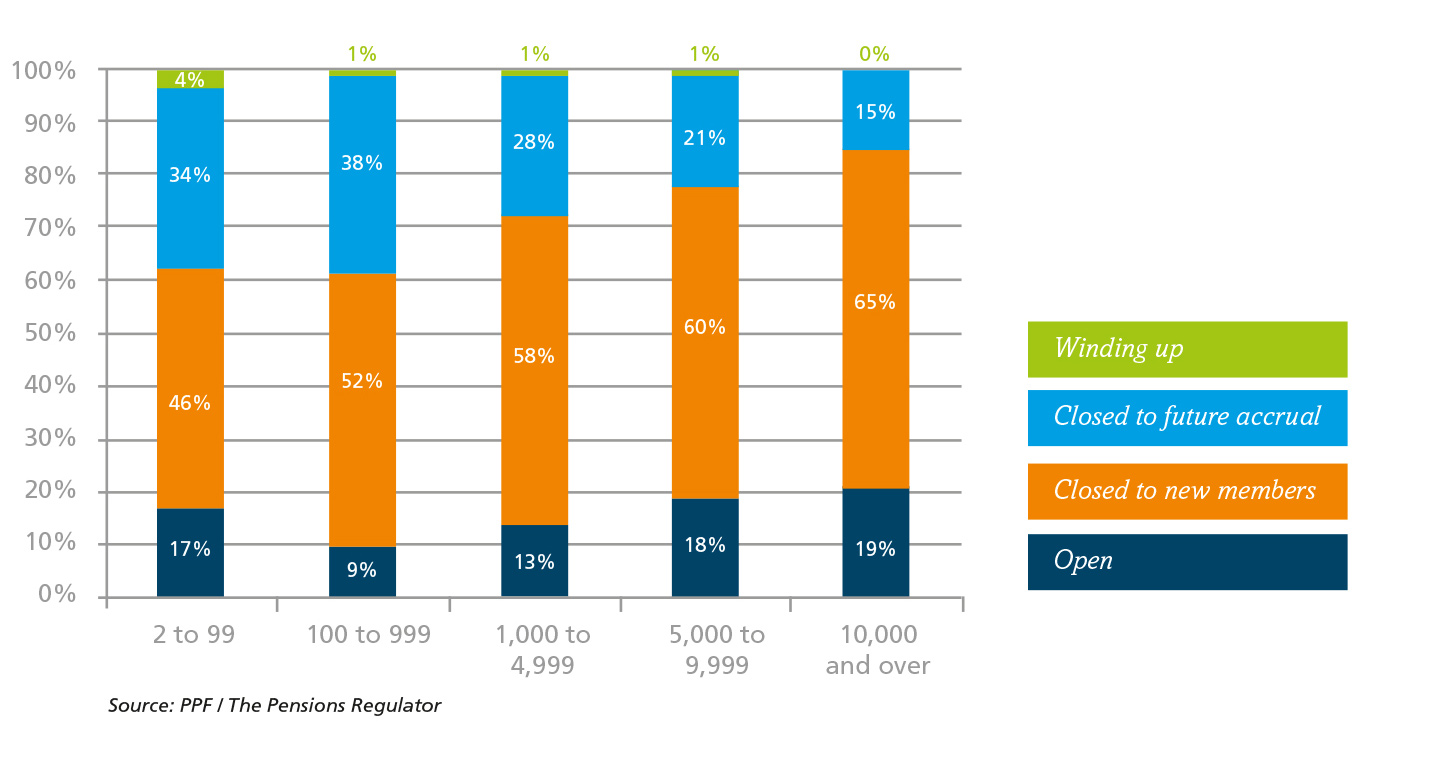 Other employers have decided to close their schemes to new entrants but to allow existing members to continue to accrue benefits, perhaps on a reduced scale, or to introduce other forms of defined benefit arrangements that share risk between the employer and employees.

Redesigning future service benefits can take many forms and include:

the rate at which benefits accrue

the payment of any discretionary benefits

a career-average revaluation structure instead of a final salary structure

a pensionable salary offset such as the basic state pension

There can be restrictions in place for employers wishing to redesign future service benefits; a number of them are discussed below.

The Trust Deed and Rules (TD&R) regulate the pension scheme (see our Rules and Regulations section for more information). This should be the first consideration when deciding whether to amend benefits or close to future accrual as it decrees the balance of powers between the employer and the trustees, including powers to amend the scheme and to what extent benefits can be modified. For example, amending benefits will often require trustee consent and sometimes trustees have been granted the power to wind up the scheme if the sponsoring employer ceases contributions relating to the continued accrual of benefits. That is to say that changing the provisions of the scheme could trigger a Section 75 (s75) debt, where this is the full amount necessary to purchase all the members' benefits with a regulated insurer. A s75 debt is typically very significant and therefore it is important to carefully consider the scheme's provisions in the TD&Rs before making changes to benefits.

Where employers propose changes that reduce the level of pensions benefits earned by current employees, this can be viewed unfavourably by trustees who see it as their duty to protect the members' financial interests. However it is usually argued that the trustees' principal duty is to protect the security of benefits already accrued in the scheme; future accrual in an occupational pension scheme is an employment benefit provided by the sponsoring employer and as such it should be up to the employer as to whether it continues to provide such benefits. Legal advice should, however, be taken to reflect the precise wording in the scheme rules.

Employees may have clauses relating to DB provision in their contract of employment, and so it is essential that employers first review the contracts of employment to ensure that they do not legally prevent the closure of the scheme to future accrual or the employer changing the terms of future accrual. Amending employees' contracts would usually require their consent however it is important to obtain legal advice as to the best means of amending future accrual terms in this situation.

The Stages of a Closure or Benefit Redesign

This section sets out the typical key stages and points to consider associated with a closure to accrual or major benefit redesign process. 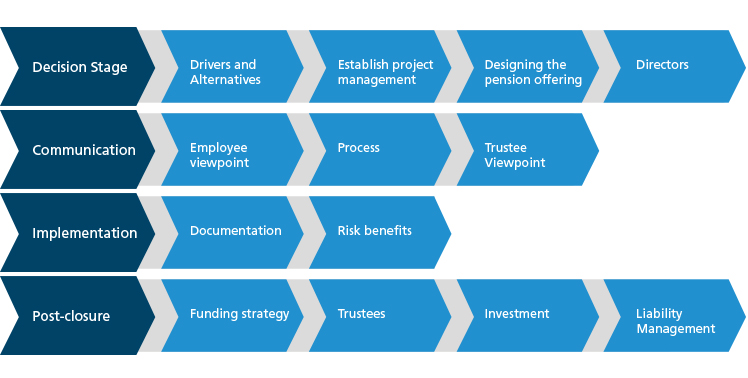 Before any changes are implemented, it is important to consider the drivers behind the employer's decision, so as to ensure that the changes implemented are the most appropriate and address the employer's concerns and objectives. The main reasons typically seen for requiring a change in the level of pension provision provided include the level of the cost of future accrual in the scheme, the discrepancy in this cost across different employees (including those in alternative pension arrangements) and the potential for further, volatile, contributions if a deficit develops in respect of the future accrual. In addition other reasons include the desire to cap the liability disclosed on the balance sheet, to minimise the impact this can have on corporate activity.

The employer's philosophy is also important as it will generally define how changes are implemented and the design of the benefits offered going forwards. The employer's culture and attitude towards retirement and their degree of paternalism will also be a key factor.

Benefits offered to the executives and directors may need to be considered separately to ensure they remain sufficiently attractive compared to the company's peers and so they are tax efficient.

When a decision has been made regarding scheme changes, an employer must inform the scheme trustees. This process usually runs more smoothly where the employer can demonstrate a robust business case for the changes and that it has considered alternatives but can justify why none of the alternatives would be viable. Statutory consultation periods between affected members and the employer, of a minimum length of 60 days, are required for a number of occupational pension scheme changes. These are known as "listed changes" and include the following:

the normal pension age specified in the scheme rules

new members of a particular description, from being admitted to the scheme

the future accrual of benefits under the scheme

the liability to make employer contributions towards the scheme

any increase in member contributions

It is important that communication to both the trustees and the employees is clear and appropriate to the audience. The consultation could take the form of face to face meetings, written communications, presentations and question and answer sessions. Where employees are being asked to make a decision about various options, it may even be appropriate to offer independent financial advice and offer a member hotline or email line service.

In addition, carefully managed discussions with unions can also be required in order to mitigate the risk of potential industrial action.

There are a number of practicalities involved with implementing a scheme change. The most important of these is to ensure that any change is fully reflected in the scheme's TD&Rs; failure to do this could result in the change being void. The Pensions Regulator will also need to be notified of certain changes.

Once a scheme has been closed to future accrual, the ultimate "end point" of the scheme becomes more visible. This can sometimes lead the trustees to try and seek the faster recovery of any deficit and to increase the margins of prudence adopted in the scheme's technical provisions, particularly because a closure leads to a finite period of time for risk premiums to "feed through". Further, as the scheme's duration will reduce on closure and in due course there will be a net disinvestment of assets, it is likely that the trustees would seek an investment strategy review. Trustees are likely to look to replace illiquid or riskier return-seeking assets with a more matching, less risky but lower yielding investment strategy as the scheme matures. This is also likely to lead to a lower discount rate being proposed by the trustees for the scheme's valuation, which would serve to increase the scheme's technical provisions. This may, however, be at least partially offset by the fact that future deferred revaluation is usually expected to be lower than the lost future salary growth.

Once future liabilities have been capped, many employers seek to reduce the size of the past service liabilities using liability reduction exercises. For further information on these types of exercises, see our Liability Management & Risk Reduction section.

DC schemes do not provide members with the guarantees offered by a DB scheme but can have a number of advantages over DB schemes for certain members:

The Pensions Act 2008 laid the groundwork for a fundamental workplace pensions reform, which requires every employer to automatically enrol their eligible jobholders into a pension scheme and to pay contributions to that pension scheme.

Preparing for auto enrolment falls to the employer to take the lead and it is therefore essential that business plans fully reflect the impact that it will have.

For more information about the independent, expert services we provide in this area, speak to our team today.

Also in this section

Map the course of your DB pension scheme

We've introduced DB Navigator® – our clear and simple decision-making framework that gives you the knowledge, structure and tools to optimise your strategy for tackling the journey towards your defined benefit pension endgame.